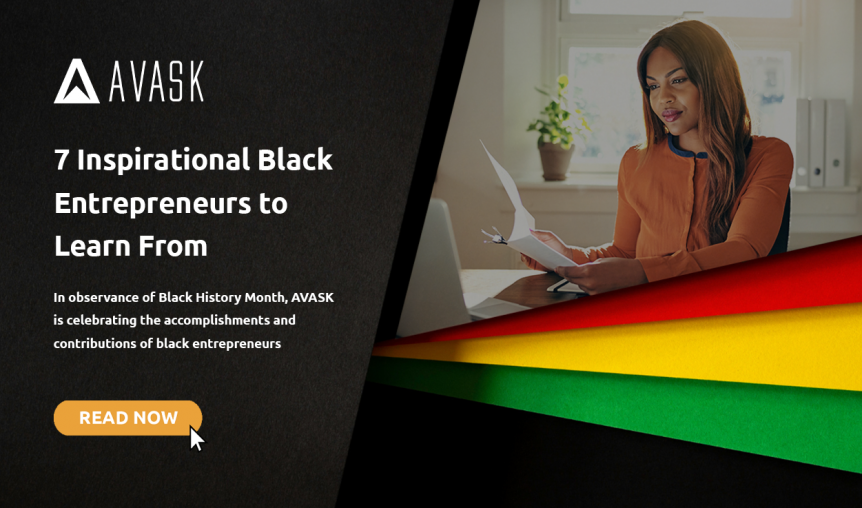 In observance of Black History Month, AVASK is celebrating the accomplishments and contributions of black entrepreneurs.

Here are seven men and women who have built empires in various industries, and some recommendations of resources they’ve created that could motivate and inspire you.

Tope Awotona is the CEO and founder of Calendly, a scheduling software company. After three failed startups, Awotona and Calendly closed an investment of $350 million, valuing the company at $3 billion.

Competing with businesses such as Square, Microsoft and Doodle in the scheduling industry, Calendly has a sleek, consumer-friendly design and a freemium model.

Tope is one of just two Black tech billionaires in the United States – the other being David Steward, the founder of Missouri-based IT provider World Wide Technology.

Listen to his podcast appearance on How I Built This with Guy Raz:

Janice Bryant Howroyd is the Founder and CEO of The ActOne Group, a workforce management company with an estimated $950 million revenue (2017). She started her company thanks to a $900 loan from her mother.

In 2013, she was appointed a USA Ambassador of Energy at the White House. The following year, Janice was recognized by Black Enterprise as the first black woman to own and operate a billion‐dollar company. She was awarded BET’s first ever BET Honours Entrepreneur of the Year and has received Black Enterprise’s Business of the Year award.

Buy her book ‘Acting Up’:

Daymond John is best known for being an investor on the reality show Shark Tank but made his mark by being the Founder and CEO of global lifestyle brand FUBU. Having started his business from his mother’s basement in Queens, New York, his streetwear brand has now become a $20 billion industry.

Buy his book ‘The Power of Broke’:

Bola Sokunbi is a Certified Financial Education Instructor (CFEI), finance expert, 4x best-selling author and founder of Clever Girl Finance, one of the largest personal finance education platforms for women in the U.S. She is known for saving an incredible $100,000 in three years on her income of $54,000.

Listen to her podcast ‘The Clever Girls Know’:

Rebecca Enonchong is the founder and CEO of AppsTech. She is also the co-founder of the AfriLabs network, which today federates 347 hubs in 52 countries on the continent, as well as the Cameroonian incubator ActiveSpaces.

A leading figure in African digital entrepreneurship, Forbes magazine listed her as a top female tech founder in Africa. She was the founder and Chairperson of the Africa Technology Forum, a non-profit dedicated to helping technology start-ups in Africa, and she is also a founding member of the African Business Angel Network (ABAN).

Read her article ‘How I built a global tech business with no funding’.

John H. Johnson is the founder of Johnson Publishing Company, which is the company behind famed Black publications such as Ebony and JET. John H. Johnson is widely regarded as the most influential black publisher in American history.

Highly involved in the local community and on a national level, John went to the Ivory Coast in 1961, where President John F. Kennedy sent him as Special Ambassador to the independence ceremonies. He also visited Kenya in 1963 for the same purpose. President Nixon later appointed him to the Commission for the Observance of the 25th Anniversary of the United Nations.

John also received numerous awards, from the Spingarn Medal to the Most Outstanding Black Publisher in History Award from the National Newspaper Publishers Association. Johnson Publishing has also been named the number one black business by Black Enterprise four times. John was awarded the Presidential Medal of Freedom in 1996.

Buy his book ‘Succeeding Against the Odds’:

Of course, we couldn’t forget our very own Melanie Shabangu, co-founder and partner of AVASK Accounting & Business Consultants.

Melanie Shabangu is an experienced accountant and tax consultant who has been providing clients with expert professional advice for over 20 years. As a partner at AVASK Accounting & Business Consultants, she has built a successful global enterprise and helps thousands of e-commerce sellers worldwide.

Working with e-commerce clients and partners has given her the knowledge to provide cost effective solutions to clients taxation compliance issues and put forward new ideas for business growth and development.

Buy her book ‘The Online Hustle’: